Microplastics are now a global pollutant that eventually end up in the food chain, water sources and soil. The level of microplastics in Georgian Bay is as high as the concentration in our oceans. Fish in Georgian Bay have higher levels than those found in ocean fish.

There is evidence that more than 800 different species are affected by plastic pollution.  Effects on animal life include decreased feeding and growth, hormone system disruption, decreased fertility, and abrasion and blockages from ingestion.  Microplastics are found in deep-sea species and can be transferred to their predators.  A 2019 study conducted at the University of Victoria estimated that humans ingest between 39,000 and 52,000 particles annually. It is not known whether it is harmful to humans to consume microplastics.

Where do microplastics come from?

Sources of microplastics include litter like coffee cups, foam dock material, nylon ropes, wipes and contact lenses.  Another little-known source of plastic pollution is microfibres in clothing that contain fibres such as polyester, nylon and acrylic.  Microfibres are tiny strands of microplastics that are less than 5mm in length, difficult to see and almost impossible to clean up.  When these fibres are shed either directly through swimming or through washing they don’t biodegrade naturally but begin to slowly accumulate.  Microfibres are the most common plastic found in the oceans and in wildlife.  Up to 700,000 microfibres can be shed in one laundry load and wastewater plants do not capture them all.  For households on septic systems, the accumulation of microfibres can lead to failure of the system by blocking effective drainage. 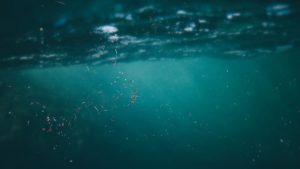 The Rochman Lab at the University of Toronto has partnered with Georgian Bay Forever on a two-year project in Parry Sound to divert microfibres from entering the Great Lakes.  One hundred volunteers from the town of Parry Sound have had a Filtrol filter installed on their washing machines.  The filter captures microfibres that would otherwise end up in Georgian Bay.  The project began collecting data in August 2019 and after three months researchers had collected 7 kg of fibres from 70 of the 100 households, which was estimated to be almost three million microfibres.  As well, pre and post data collection from the Parry Sound wastewater plant showed a 10% decrease of fibres in wastewater entering Georgian Bay.

Should all washing machines have filters?

Currently, in Japan, washing machines come with lint traps and France will make filters mandatory by January 2025.  In Ontario, legislators are starting to work on legislation to require filters and are waiting to see the final results of the Parry Sound study.

How can I help?

For further information on how you can help refer to the Georgian Bay Forever website.