On Breaking the Code of Silence

I suppose everyone has a cottage story that cannot be repeated in public lest the listener take a dim view of either the perpetrator or the establishment itself.  In the odd instance, there occurs an event of such potential trauma to family members that one feels a chivalrous need to shield them from the details…possibly forever.  As you may expect I have just such a story that my brother Alex and I agreed not to tell lest there be unpleasant repercussions.  But now that the family cottage has burned to the ground, I no longer feel honour- bound to observe the code of silence.

The original cottage, built by my grandfather in 1923, was conceived as a hunting and fishing lodge rather than a vacation home with creature comforts.  Not only was my long-suffering mother denied electricity for more than 30 years, there was pretty grim indoor plumbing as well.  (On that subject, I recall as a youth having to contend with hordes of mosquitos and the constant fear of rattlers as one made one’s way to the rickety old outhouse in the woods.  An outhouse, by the way, featuring two seats, which speaks volumes about familial closeness in days bygone.)  But I digress.  The point of the story is that not only was the cottage not insulated, it was not wired for electricity nor properly plumbed.

As every builder will attest, it is not the easiest thing to renovate an old building especially when there is no decent crawl space, no proper lighting to see what you’re doing and no power tools.  Perhaps I’m just making excuses for the appalling opening that was made in the floorboards to accommodate the septic line for the original indoor toilet, installed in the days before hydro.  My grandfather unwittingly had hired The Great Impostor starring in his lesser-known role in the 1940’s classic The Carling Carpenter.   Said individual had seemingly taken an axe to the floor to fashion the hole and then feathered wooden shingles around the pipe to cover up the butchery.  It may have actually worked for a while, although you can imagine the long-term consequences with insects and rot in a damp space.

Which accounts for the nightly entertainment that we were frequently treated to whilst reading by coal oil lamps, huddled around the old stone fireplace in the living room.  A deadly quiet night would suddenly be disturbed by the sound of something noisily rolling down the rafters!  What on earth could it be?  Well we finally figured that either chipmunks or squirrels had found Grand Central Station under the toilet and made their way up the wooden studs in the walls into the attic.  With no insulation to impede the rolling or muffle the sound, the Brunswick Beasties took great delight in bowling acorns down the rafters from the peak, scampering down to retrieve them and then letting the next batch go.  The commotion would often last for an hour or more.

Now to the point of the story.  One day Alex and I decided that in order to put a light in a bedroom closet, we had to run some wiring through the attic.  This was no simple task, as the access was by way of a trap door in the ceiling.   Being the mental midget that I was, I dutifully volunteered to climb the ladder and move aside the trap door while Alex held the ladder steady.  Now I ask you to picture the moment when, standing high up on the fourth step of the ladder, having lifted the trap door I stuck my head up into the blackness of the attic, switched on my flashlight and found myself staring inches away into the steely black eyes and flickering pink tongue of a viper the size of an anaconda!  Letting out a blood-curdling scream, which naturally very nearly gave Alex a heart attack, I dropped my flashlight and leaped straight to the ground over his amazed face, whereupon he knocked over the ladder in joining me in a headlong flight out of the closet, out of the bedroom, and out of the cottage. Had we not been living on an island, I suspect that we’d be running still. 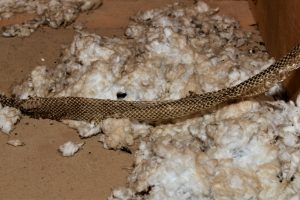 Alex recently recollects that should he wish to confirm the veracity of my source of fright, my rather callous advice to him at the time was “be sure to hold a tennis racquet in front of your face when you stick your head up into the attic”.  Needless to say Alex never bothered to conduct the confirmation, the wiring job was never done, and he and I, in the interest of protecting our reptilian friend, agreed never to tell a soul.  After all, knowing what lurked above, who could ever sleep peacefully inside again?

Years later, during a renovation of the porch, the contractor, who was no sissy, let out a curse worthy of his trade, having had snake skeletons raining down around him after ripping out a ceiling panel.  Seems that rattlers, who are excellent climbers found Grand Central Station led straight to the Brunswick Beasties’ bowling alley.  Given the huge entertainment value, the Brunswick Palladium had over the years attracted a menagerie of rodent spectators as well.  So the rattlers took up residence, kept a very close eye on the spectators filing into the Palladium, slept on nice toasty floorboards, dined at their leisure and lived happily ever after—except for that one occasion when a two-legged creature bashed an opening in their living room floor, flashed a blinding light straight into their eyes and then let out a shrill scream for no reason at all.  “Scared the hell out of us!  Stupid human.  Serves him right!”