I might be a humble two bedroom, no bathroom cottage nestled amongst the trees on Peter Pan Island, but I have a proud and varied history.

I started life as a house for the manager of the cordite factory in Nobel during WWI. When the war ended my services were no longer needed, so I was sold to John Stuart Brown, who promptly loaded me unto the back of a sled and used horses to cart me out over the ice to a nameless island in Carling Bay. John Brown had bought the island in 1919 from a local enterprising land speculator/dentist named Milton Armstrong who had bought a number of islands in the area from the Crown and sold them again as quickly as he could. John Brown paid $500.00 for the thus far nameless island, and enjoyed five summers there with me providing shelter. 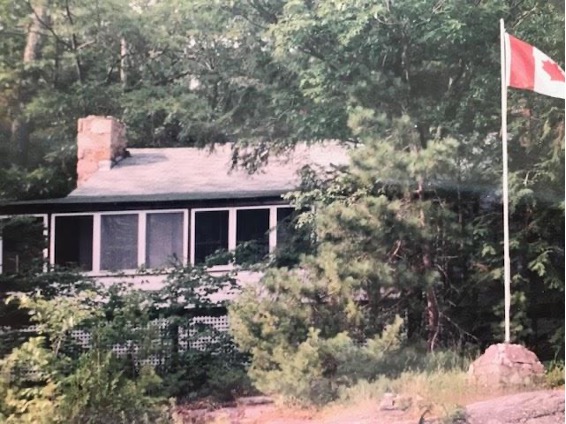 Me amongst the trees

My long association with Daisy Sutherland began on September 24th, 1924. She bought the island, along with me, for $1000.00. Daisy named the island I sit upon “Peter Pan”, after the hugely popular book, and used a boat she called “Wendy” to travel back and forth to the mainland.

I mentioned that Peter Pan Island was originally Crown land, but that’s not accurate. The island, and all the 30,000+ islands around me, provided food and shelter to the Anishinaabe Nations people for thousands of years. The Crown obtained these islands via the Robinson-Huron Treaty in September 1850 and undertook a survey; my island was left nameless but the surveyor officially designated my companion island, which is attached to Peter Pan by a small strip of land, “Muriel Island”, named after his daughter. Separate deeds were issued for Muriel and Peter Pan and they remain separate islands today.

Daisy bought Muriel Island in 1926, paying $150.00 for it with the agreement that a building would be erected within two years. Local members of the Wasauksing First Nation helped build my new neighbour, a boat house with bedrooms overhead. Daisy and her husband John maintained close ties with the contractors for the rest of their lives. Indeed one man acted as pallbearer at John’s funeral in 1957.

In 1935 John built his mancave, a large cabin, to act as an offseason lodge for fishing getaways. Not to be outdone, Daisy built onto me an extension to include a fireplace and a wrap around porch. The fireplace is still my only source of heat and is now adorned with a large stuffed Muskie, caught off Muriel Island in the late ‘20s. For a long while there were the three of us on the two islands- the boathouse, the cabin and me – but we lost the boat house in 1970 when its foundations were destroyed by the ice. 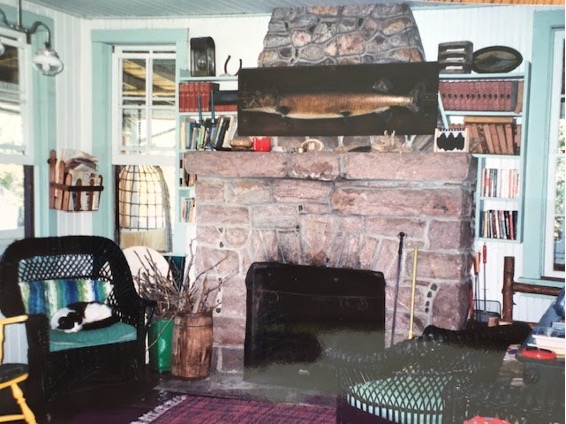 My fireplace with the Muskie.

The summers after WWI were very busy and social. The cabin and I provided shelter for the many guests, mainly Daisy’s five sisters. Mrs. Jones, mother of long time local caretaker and jack of all trades Lyle Jones, acted as cook each summer. Perks Grocery store in Parry Sound sold groceries at the dock via an old tugboat, the John P, kitted out with shelves to display any number of goods. Perishables were kept in my icebox, cooled by blocks of ice cut from the lake in the winter and kept in sawdust in the ice house, a shed down towards the beach. At the back of the ice house was an enclosed space with a bucket, the one and only toilet. 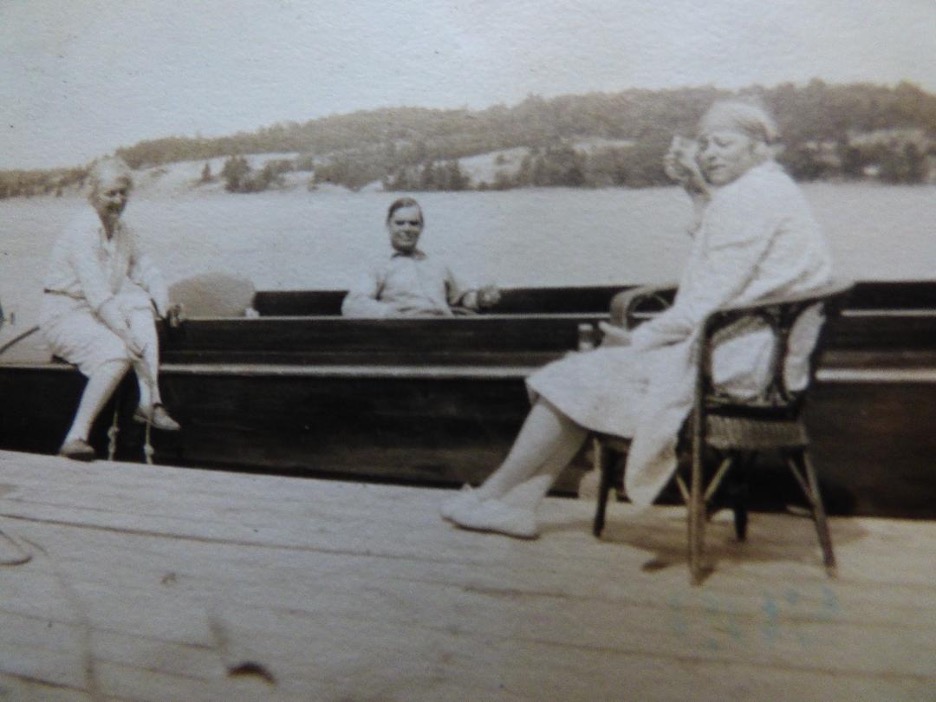 But another war slowed things down. The people of Nobel were called upon once again, this time to produce explosives and munitions. I could hear the dynamite blasting all day.

WWII changed what I could see from my perch on Peter Pan. I had looked out upon the buildings at Depot Harbour on Parry Island since I had arrived. Depot Harbour was one of the most prominent ports on the Great Lakes at one time, visited by ships like the Edmund Fitzgerald and boasting a population of 3000, but alternative routes like the Welland Canal and a drop in grain prices in the depression led to its decline. Nevertheless the buildings remained until August 14, 1945, when the elevators caught fire, spreading embers to the freight sheds which still contained cordite. The explosions destroyed everything in sight and Depot Harbour was no more.

There had always been a strip of beach between the two islands, but this was expanded in the 1950’s by Shell Oil, that boated a pile of sand over. This was to make up for an oil spill they had allowed to happen. Not a great event, but the beach has been enjoyed thoroughly ever since. 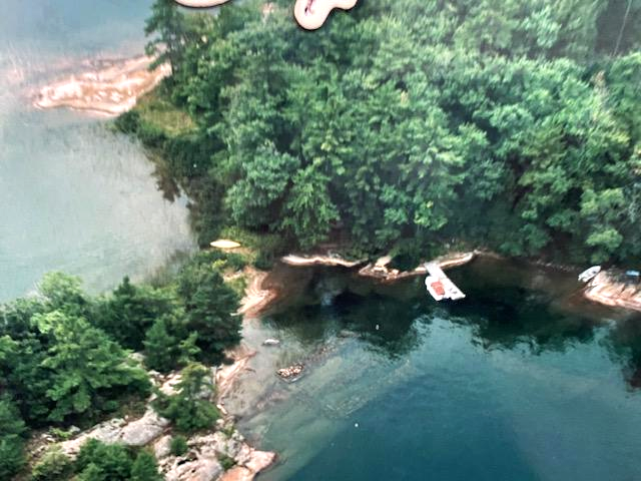 The two islands are joined by a beach. The rock cribs that supported the boat house are visible under water.

Daisy, John, their daughter Rosemary (born 1910) and their granddaughter Rosemary (born 1933) continued to enjoy the summers on the islands. Daisy added a few modern conveniences. While kerosene lamps are still used today, Daisy added propane lights, a fridge and a stove in the late 40’s and early 50’s. Cooking previously had been done on a kerosene stove and a wood stove, and until the 1990’s Thanksgiving dinners were cooked with this wood stove until it was decommissioned. Water is still drawn from the lake with a hand pump and when dishes are to be washed water is heated on the propane stove. 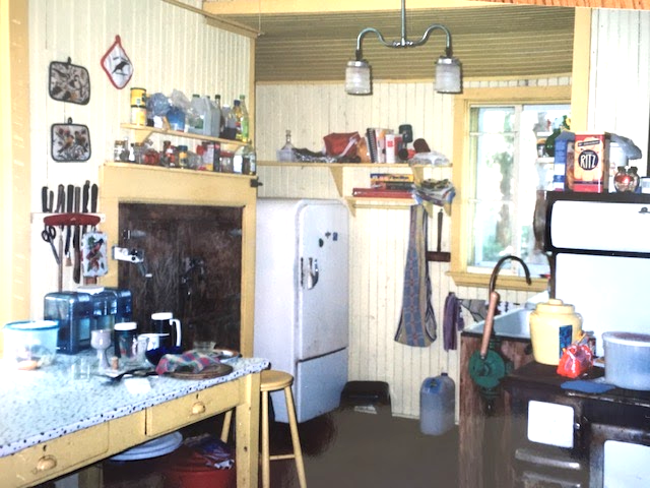 My kitchen as it is today, showing the icebox, fridge, pump, wood stove and propane light overhead. 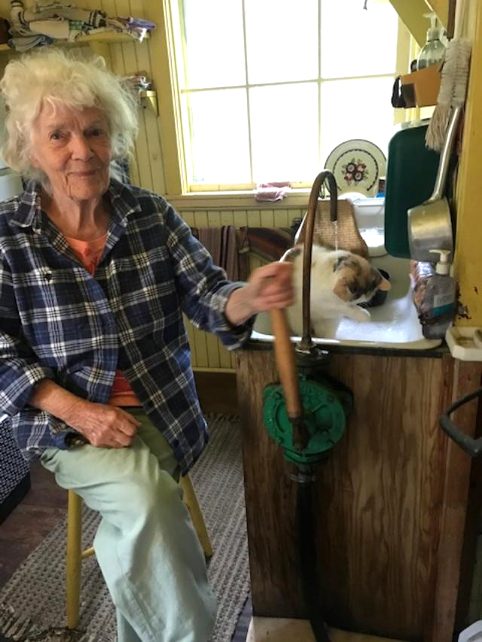 Rosemary pumping water for her cat who enjoys morning baths.

Granddaughter Rosemary, now married to Keith Rowe, inherited the two islands along with me in 1962. Their three daughters adopted the cabin as their own sleeping quarters, while I was central to their summer family life. The cabin was briefly taken over by the inaugural meeting of the North Sound Association in 1977.

Rosemary and Keith added some modernizations. An outhouse, with a long drop pit, replaced the bucket in 1972. The 1976 Montreal Olympics were watched on a tiny black and white tv powered by the boat battery. A satellite phone was added in 1997, again powered by the boat battery, for brief phone calls when needed. Before this the only phone available was a payphone at Harrison’s Landing.

The Island Princess started passing by in 1978, and later the larger Island Queen took over the route, reminding us everyday that it is 11:20am, time to jump in the lake to meet the waves.

Further changes were afoot when Daisy’s great great grandchildren came along. Two outhouses were installed in 2011, using new fangled technology (composting). Solar power was added to me so Rosemary and Keith could read by a light bulb and charge up their laptop. Later the cabin had solar powered lights installed in 2009.

I’ve been busting at the seams for weeks at a time throughout the new century, and I hope Daisy’s great great grandchildren bring their children to run around on my creaking floorboards. Covid has slowed visits down, but I look forward to the future with a full house once again. 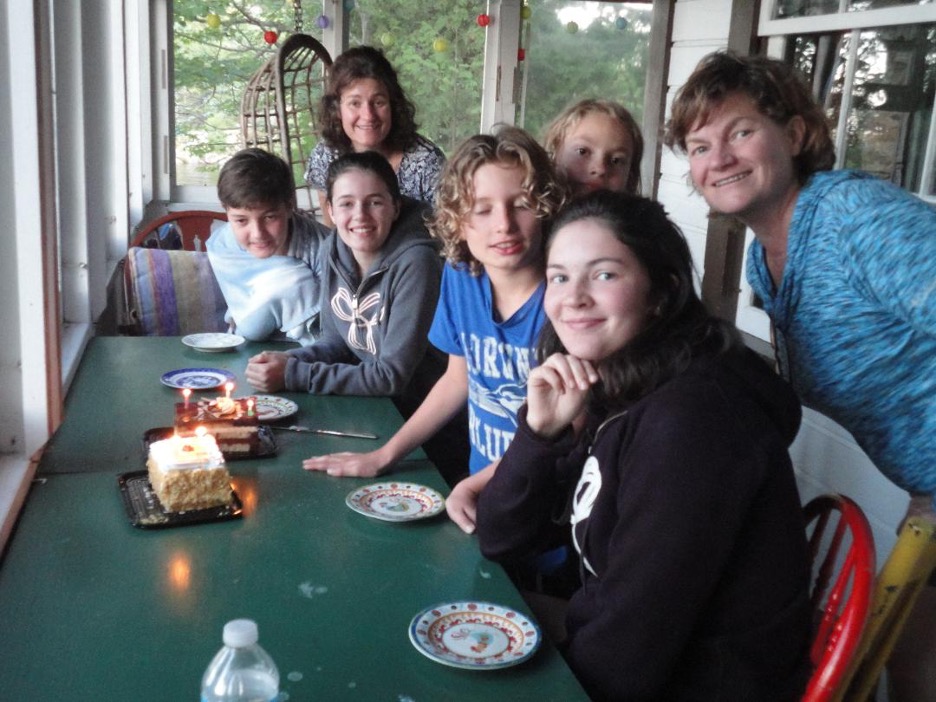