The Supply Boat: Lifeline of the Pioneers

Mention the words supply boat to anybody in the Georgian Bay community today and you will almost certainly be greeted with a blank stare.  And yet, just a few generations ago, it was the weekly event that whole routines and schedules revolved around.  If one was planning to go fishing that day, better be sure to get back before the Supply Boat comes around or do without for the next week.

You see, back in the early part of the twentieth century, the town of Parry Sound was still a fairly rough and tumble logging village, notwithstanding that alcohol was prohibited within the town boundaries.  There were no stores selling more than the most rudimentary of goods and, naturally, no supermarkets.  In fact, Snug Harbour, Dillon and all the tiny shoreline communities were only accessible by logging roads cut through the wilderness in support of horse-drawn sleighs used to transport fallen logs over the snow down to the water’s edge.

Enter the John P. better known as the Supply Boat.  Every week on roughly the same schedule, it would wend its way north from Parry Sound to Pointe au Baril announcing its pending arrival to shoreline residents by giving two toots of its horn just as it came into sight.  Joyous residents would pour out onto their docks and stock up on milk, eggs, flour, meat and vegetable.  But the industrious John Perks, related of course to our own smoked fish maestro Bryan Perks, seeking profit wherever it may be had, loaded his boat up with all manner of hard goods as well.

The reason the story resonates with me so well is that virtually everything in the cottage I grew up in came from the Supply Boat…the dining room table and chairs, the wicker rocking chairs, the porcupine quill sewn trivets, the lamps, the blankets and so forth.  I was repeatedly told that the source of much of this marvellous fare were the local Indians, who paddled their canoes down to the town docks of Parry Sound and traded their goods to the merchants of the day.

Funny thing, but as a kid, I had little curiosity as to the authenticity of this legend, but as I grew older I wondered what the boat looked like and who was the entrepreneur behind it.  Recently I had the immense good fortune to discover an old photo album that survived a catastrophic fire by virtue of it having been removed to another building.  As we can see from the photo attached, the John P. featured function over form, and it was not always able to land apparently.  The message merely states we took our supplies in mid-channel this Sunday (Sept 11, 1927).  We will never know why this was necessary, but perhaps the water was too rough to attempt a landing.

In any event, it gives me immense personal satisfaction to finally see the old John P. just as it looked almost one hundred years ago. 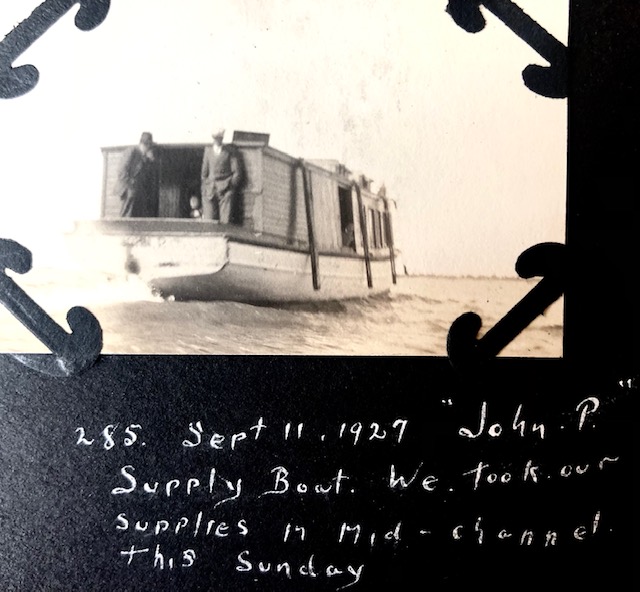