Adam Brown is best known for his lightkeeping duties for forty years at Red Rock from 1897 to 1937 and simultaneously at Snug Harbour for six or seven years starting in 1908. He eventually became the general supervisor of the Parry Sound shipping channel. Red Rock light is perched on a magnificent chunk of rounded granite exposed to the full force of Georgian Bay storms during which, at times, waves can be seen breaking over the top of the lighthouse at 50 feet.

Adam Brown was born in Holstein, Ontario in December 1862.  He came to Parry Sound in 1886 to work as a butcher and later on as a fisherman.  He travelled by train to Gravenhurst where he transferred to a stagecoach. However, the roads were so bad Brown and the other male passengers were obliged to walk most of the way from Gravenhurst while the ladies and freight rode in the coach. 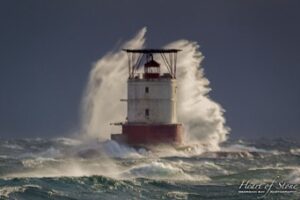 Despite his forty years at Red Rock, Adam’s job wasn’t always secure. Lighthouse keeping jobs were subject to the whims of political appointments. When the political winds changed, a local contender came after his job. When the new recruit arrived at Red Rock to take over Adam had a surprise planned. He opened an air valve just a crack such that air rushed out with a terrifying screech causing the usurper to plunge down the tower ladder. When Adam went to search for the unwelcome visitor he found him crouching in a six-foot bank of ice that had been cut for the water line. Brown assured him that all was clear but the would-be contender declared that he wanted no part of lightkeeping. 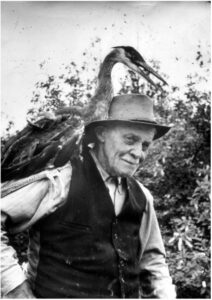 Adam Brown with a heron on his shoulder taken in 1937.

Life on Red Rock wasn’t always tranquil. Occasionally Adam was called upon to help with rescues. When the Seattle went down in 1913 just off Green Island in the nearby Minks chain, Adam took his boat to the site and helped survivors off the stranded wreck.

During his 40 years on Red Rock, Adam encountered many challenges, even with seemingly simple duties. One harrowing event occurred when he was painting the upper story of the lighthouse while suspended from a bosun’s chair. The rope securing the chair wasn’t properly set, causing the chair to drop and jerk him out of the chair. Ever resourceful, Adam grabbed an iron rod jutting out of the tower and crawled along the roof that was 40 feet up and crawled through a window to safety.

Brown managed another narrow escape in December of 1903 when he was supposed to be taken off Red Rock for the close of the season.  Rather than be stranded in the ice-covered tower over Christmas, Adam decided to set off alone by boat, rowing to the mainland through the icy waters. Initially he made good headway but eventually became trapped by ice so he set off on foot across the ice. In a heavy snowfall, just as his energy and hopes faded he heard voices nearby. He was fortunate that some fishermen in a nearby shanty heard his whistle for help and assisted Brown to get to shore.

Adam Brown standing beside the Fresnel lens in the top of Red Rock Lighthouse in 1937.

Despite the challenges of life on Red Rock, there were some lighter times. There are reports of lively dances and parties at the fishing station nearby on the Minks. 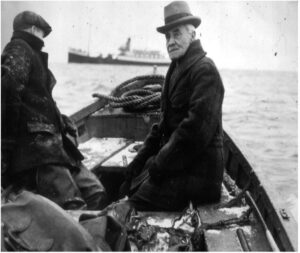 Adam Brown leaving Red Rock taken in 1937 going back to the mainland for the last time. George Johnston is manning the boat taking Adam to the lighthouse tender ship, the St. Helier’s (seen in the background) that will take him to the mainland.

Adam earned a reputation as a friend of nature. The insects that buzzed around the tower light attracted birds that became blinded by the bright light beam. Numerous birds were injured after striking the lantern. Brown turned the lighthouse into a bird hospital, nursing scores of birds back to health each year.