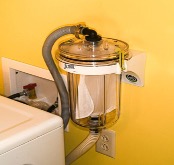 In July 2020 we reported on the Divert and Capture Project being conducted in Parry Sound by the Rochman Lab at the University of Toronto and Georgian Bay Forever. The two-year project was designed to divert microfibers from entering the Great Lakes. Ninety-seven volunteers from the town of Parry Sound had a Wexco 180 Filtrol filter (photo below) installed on their washing machines. The filter captures microfibers that would otherwise end up in Georgian Bay. Data collection for the study began in August 2019.

Why is this study important?

When we wash our clothes hundreds of thousands of microfibers (less than 5 mm in size) are shed into our wastewater and end up in treatment plants (WWTPs). While many fibers are caught at treatment plants, billions get through to water bodies like Georgian Bay daily. The microfibers from our clothes and the chemicals they bring with them are pollutants that can end up in the environment and the food chain. Laboratory studies have shown that filters on washing machines can capture 85% of fibers at source. To gain support for change and prompt solutions to reducing this pollutant, it is necessary to show that filters will work outside a laboratory setting.

Most cottagers rely on septic systems to serve as mini WWTPs. Like large scale, municipal facilities, most individual septic systems are not designed to capture pollutants such as microfibers, which eventually end up in the environment. Thirty to fifty percent of wastewater treatment is completed in the septic tank. Although some microfibers may get trapped in either the sludge or scum, their size and weight mean that they can also remain in the wastewater which flows out of the tank and, eventually, into the leaching bed. A septic bed is composed of porous materials, such as gravel and sand, which act as filters between the liquid and the surrounding ground water system. Fifty to seventy percent of wastewater treatment is completed in the septic bed where any remaining particles are removed from the water. However, because they are often too small to be filtered out by gravel and sand, microfibers can flow right through and follow the water into the surrounding environment, including into surface and groundwater.

Surface water includes any freshwater that’s sent into wetlands, stream systems, and lakes. Groundwater exists in subterranean aquifers that are situated underground. Most groundwater is obtained from snowmelt and rainfall that gets into the bedrock via the surrounding soil. Surface water, often a source of drinking water for cottagers, may be contaminated with microfibers, making unsuspecting cottagers susceptible to this type of pollution.

Even if septic beds are successful in trapping microfibers, this is not a complete solution because microfibers are detrimental to the overall health of the system. Fibers that are removed during the filtration stage remain in the septic bed which, in time, will become clogged and will have to be dug up and disposed of. Septic bed waste often ends up in a landfill and, if not done properly, the disturbance of the sand and gravel can lead to further microfiber pollution.

What were the results of the Parry Sound study?

Filters can catch a significant amount of microfiber/plastic pollution at source (i.e. the washing machine) before this pollution goes to WWTPs.

Filters led to a significant decline in pollution in the effluent (what goes out to water bodies after treatment).

The researchers were surprised at such a large decrease in microfibers at the treatment plant, since filters were only installed in 10% of homes in the area. The researchers suggest that a possible explanation for such a substantial result could be related to behavioural change. Local recruiting efforts and microfiber awareness campaigns (as part of the Georgian Bay Forever Divert and Capture program) may have had indirect effects. For example, if awareness campaigns led to changes in washing habits (i.e., washing less, washing with cold cycles, using a washing bag), this could contribute to further microfiber emission reductions. To test whether applying filters in a community can lead to indirect reductions in microfiber emissions from modified laundering practices, future studies could focus on whether community-wide pilots impact behaviour.

Microfiber pollution from washing clothes is synthetic AND is also plant-based (cotton for example). Both are of concern.

Although the study results show that filters on washing machines work to reduce microfiber/microplastic pollution from getting into wastewater, hardly any households have these filters.

What can I do?

This Bill will prohibit the sale or offering for sale of washing machines that are not equipped with a specified microplastics (microfibre) filter and provide for corresponding penalties in case of non-compliance. Legislation like this will make washing machines with filters more easily available in the future to everyone who purchases a new washing machine. Find information about writing your Ontario MPP at:

Whether you are on a municipal wastewater system or a septic system consider buying a filter for your own washing machine.

There are different filters on the market. The U of T Rochman lab tested two outside washing machine filters. Both the Lint Luv’r and the Wexco FIltrol 160, were tested and were found to be 87 to 89% effective at capturing filters. Both are available in Canada and cost approximately $180 to $220.

Avoid over consumption of clothing, decrease your laundering and use cold water for laundry.

Note:  The researchers are currently recruiting three hundred households in Collingwood, ON to volunteer for a free washing machine filter and to participate in a follow-up study. For further information on the Parry Sound study and the planned study in Collingwood, go to: georgianbayforever.org