From Billiard Ball to Forest:  Time Travel in the Georgian Bay

It’s pretty mind-boggling to think that at the height of the Laurentide Glaciation, about 25,000 years ago Carling Township was covered in a sheet of ice some two km thick.  And that ice only disappeared about 12,000 years ago.   But what a bleak landscape was revealed when it did…virtually the whole of Ontario was bald as a billiard ball!  The enormous weight of the ice sheet served as a massive plough as it pushed whatever topsoil was present as far south as St. Louis Missouri.  And yet here we are just a few millennia later with pine, oak and birch literally everywhere.  So where did Carling’s trees come from?  Seeds didn’t fall from the sky and take root on bare granite.  They could never have survived the smallest interval without rain as there was obviously no shade and no soil to retain moisture. How do we account for countless millions of tons of matter seemingly created out of nothing? 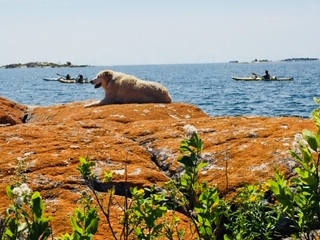 They beauty of living on the shores of the Georgian Bay is that it takes very little effort to solve the puzzle.  Simply boat out to some of the outer islands like the Minks and see how things might have looked in the early post-glaciation period.  The first thing one should observe is that even on the most windswept and barren island, the rocks are not totally bare.  The photo above illustrates this point perfectly.  If you can tear your eyes off Lola, that magnificent Labrador retriever, you will notice that the rocks are literally covered with orange lichen.  That particular lichen is called caloplaca marina and only grows where spray from rough waters hits the rocks.  It is one of about 20,000 known species of lichen which cover 6% of earth’s land area.  Lichen are unique in that they grow on almost anything and require nothing more than water and sunlight to grow.  When they die or get eroded by the action of water or ice, the residue gets trapped in small crevices, providing sustenance for subsequent species of mosses, grass, bushes and finally trees.

But that’s not a sufficient explanation of how Carling Township became covered with trees.  The inquisitive mind will rightfully argue that even the tiny lichens have mass and how did that come about?  The answer, quite simply is Photosynthesis, the miracle process that brings cellular growth about.  Amazingly, the energy of the sun powers the chemical process by which the elements of ordinary water are combined with carbon dioxide to form glucose and release oxygen.  The glucose then feeds the living cells which account for the increase in mass.  By chemical formula:

Albert Einstein understood that matter and energy were related.  His famous formula     E = MC2 underpins the science behind all this.  When the energy of the sun is applied through the process of photosynthesis, mass is created i.e. trees grow.  And when we put this growth cycle in reverse by burning wood, a corresponding energy value (heat and light) is released.

So next time you throw a log on the fire, think about the heat that you are getting.  It’s years of sunlight falling on earth from long ago that you are resurrecting as heat.  Isn’t that a really cool thought?  That old oak tree behind the cottage has been kindly storing up all that energy that it has enjoyed over its lifetime for our personal warmth after it has sacrificed its life.  We should not only stand in awe over the miracle of life, but be grateful to Mr. Oak for selflessly providing for us.