Nature Sure is Amazing

During the past week, several times when I was in the outer waters in my boat I had the pleasure of witnessing some amazing optical illusions that apparently are not all that uncommon on the Great Lakes.

Many folks may know more about this than what I’ve discovered in a small bit of research, but apparently this “land stretching” is termed “Fata Morgana.”  According to a source on the Internet, it occurs “when a warm layer of air rests over colder denser air, forming an ‘atmospheric duct,’ which acts as a refracting lens.”

Within are four photos. In what is labelled Pic 1, you are looking south toward Snake Island and Bateau Island.  In Pic 2 you are seeing the outer edge of Franklin Island, which appears to have impressive vertical cliffs.  In Pic 3 you should be seeing a vast expanse of water between where I am and Franklin Island, with one small shoal in between.  Instead, you see the shoal close up and a mirage of a stretch of land, which doesn’t even exist there!  In Pic 4 you are seeing two small rocks a long distance away from me between where I am and the Jones Island lighthouse.  They are barely above the waterline normally, but Fata Morgana works magic on them. 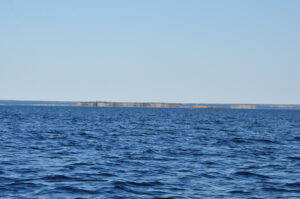 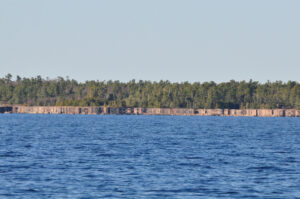 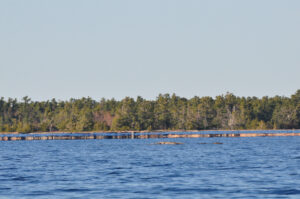 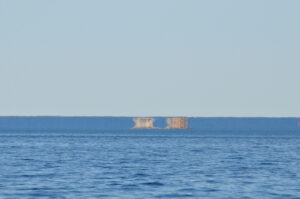