Our cottage sits high above the water that we call Gneiss Cove. We decided this was an apt name for the body of water that we swim in, watch interminably, paddle out of to get to Snug Harbour, Franklin Island and Georgian Bay itself, because, first, it isn’t correct to call it a channel. Our cove is closed in at one end as the land to the north of us curves around to form a small harbour. I don’t know the proper geographic term for this body of water – maybe a fjord or an inlet- but Gneiss Fjord or Gneiss Inlet doesn’t sound as quixotic as Gneiss Cove.

We decided on the first part of the name because our cove is completely banked by gneiss rock. To learn about gneiss, I would refer you to the excellent book edited by Nick Eyles entitled Georgian Bay Discovering a Unique North American Ecosystem, Fitzhenry and Whiteside, 2017. I would also recommend one of Professor Eyles’ “rock walks” which is how we first learned about gneiss rock.

All of that is background to what this article is really about which is the phenomenon called a “seiche” (pronounced saysh) which we really experienced for the first time this spring. I know that we have seen a seiche on occasion during our nine years here, but this spring the water in our cove rose and fell by two feet within a matter of a couple of hours. Remarkable! 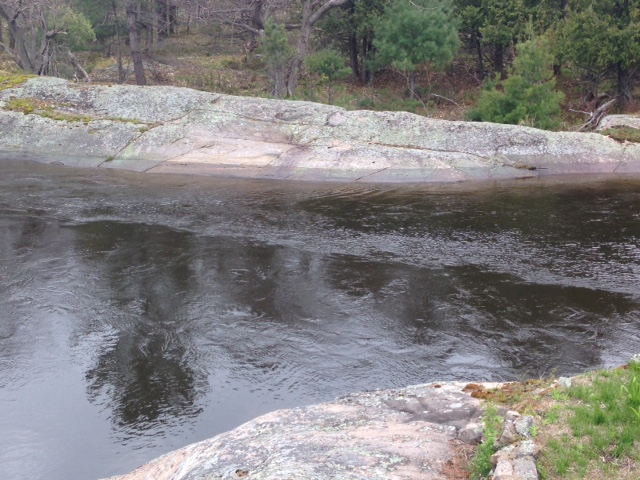 Normally our cove is like a swimming pool. It is warm because it is relatively shallow (too shallow during the low water level years) and because it is protected on three sides by land, it is usually very calm. But this spring, we have had whirlpools, waves, eddies, and changes to the direction of the flow of water occurring within minutes. On a few days, we could have gone surfing!

I found out from our cottage neighbour, Tom Betts, who is an environmental scientist, that “seiche” is the term given to this activity.  Not being a scientist, I am probably not going to explain this as well as Tom could but I will give it a go. Seiches occur in large bodies of water that are closed or semi-closed – such as our cove, a harbour or a lake. A seiche is a standing wave, meaning the sum of two waves that are moving in opposite directions. “Seiches are typically caused when strong winds and rapid changes in atmospheric pressure push water from one end of a body of water to the other.” according to the National Oceanic and Atmospheric Administration of the U.S. Department of Commerce which also explains that if you have ever witnessed water sloshing back and forth in a bathtub, you have witnessed a small-scale seiche. When the wind stops, the water rebounds to the other side of the enclosed area, with the oscillations of the wave continuing for hours, or even days. Seiches have been compared to meteotsunamis; however, they are different phenomena with winds having a greater effect in the creation of seiches while changes in air pressure play a more significant role in a meteotsunami.

Unfortunately, at the most dramatic moment of the seiche phenomenon in our cove, my photographer was otherwise engaged trying to deal with our wayward docks that had been pushed into the middle of the cove by the retreating ice. Nevertheless, the accompanying photo might give you a sense of the drama that can occur in Gneiss Cove.