By Peter Pook and Bruce Davidson

Sadly, our federal government, the caretaker for Canada’s lighthouses, has declared many lighthouses across the country redundant owing to new navigational capabilities enabled by the global positioning system. Ottawa seeks to convey ownership of these lighthouses to townships or to caretaker organizations like the West Carling Association. Amazingly, within the waters of Carling Township there remain three functioning lighthouses as well as three functioning and one decommissioned light station.  In days of yore a stand-alone light, or light station, was erected in front of a proper lighthouse, tended by a keeper, so that an approaching ship would turn when the two lights came into alignment.  Carling may have more lighthouses and light stations than any other town or township on the Great Lakes.   Challenge:  Can you name all of them?  (A list appears at the bottom of this article.)

Carling Township decided to assume ownership of the Snug Harbour Lighthouse in 2016 and received $90,000 from the DFO for future repairs. Fortunately, Snug Lighthouse is clad in aluminum siding and is well preserved. It was built in 1894 and much later had a kitchen added to the back of it. So far it is the only lighthouse on Georgian Bay that has been given historical status by the federal government.

Over the years the original boathouse and dock on the south side of the lighthouse were destroyed by the elements, although the dock cribs can still be seen.  Two sheds east of the lighthouse have also disappeared with the passage of time.  Around 1956 Snug Light was electrified with a small backup generator building being built nearby.  Some time in the 1960’s, a new boathouse was built on the more protected east side of the lighthouse along with a cement pier, a railway track and electric hoist capable of bringing a motorised lifeboat onto drydock inside the boathouse.  A massive radio tower standing over 40 meters high was added around 1970 and subsequently removed in 1996.  Other modifications made were the pouring of a concrete helipad as well as the addition of a newer, larger generator building.  Snug Light remained tended by a keeper until the mid 1970’s.  For a number of years thereafter the Snug Light served as the search and rescue station for Central Georgian Bay, staffed by Coast Guard Cadets.  Local lore has it that some of these cadets were only too happy to demonstrate the capabilities of their high-speed zodiac by conducting frequent searches for potential damsels in distress… notwithstanding calm waters and brilliant sunshine.  After another round of federal budgetary cuts the summer intern program was cut. For several decades now the lighthouse has been unattended and largely neglected. 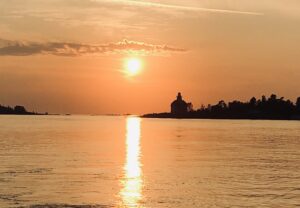 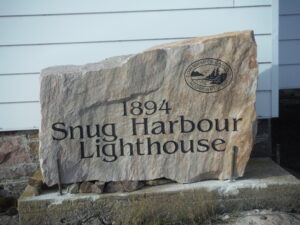 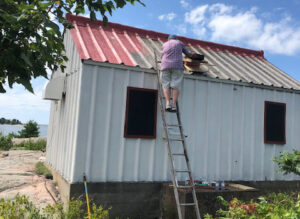 A few years ago, in an effort to secure the premises from potential vandalism, the Township shuttered the ground floor windows with plywood panels painted a solid red.  Two summers ago a group of WCA members calling themselves  “Friends of the Lighthouse” saw an opportunity to improve the shuttered appearance and approached the township about painting the shutters to appear like windows again. When Carling gave its approval, a work party was quickly organised and a marvellous transformation undertaken with great enthusiasm from all.  Flushed with that success, last year we asked Carling if we could paint the horrible dirty gray generator building to match the lighthouse with white sides and a red roof. That task turned out to be somewhat more than we bargained for, but was accomplished without scaffolding using a little ingenuity and plenty of grit and paint. In addition to painting the generator building  in colours matching the lighthouse, faux windows were added to the east side of it as well as the adjacent building.  With the inclusion of the boathouse we now have four buildings on site matching the historical appearance of the lighthouse.

With the aesthetics of the buildings now greatly improved, the task of Friends of the Lighthouse Committee has now largely become one of ensuring that that the grounds are well maintained, and the buildings secured from vandalism.  Visitors can access the history of the building on the Carling Township website.

Editor’s Note:  We were delighted to see the Coast Guard repainting Red Rock Lighthouse this summer. Hopefully they will restore the Jones Rear Lighthouse next or Carling could consider assuming ownership of that as well.