Georgian Bay Forever (GBF) has partnered with the University of Western Ontario, Wilfrid Laurier University and the University of Waterloo in the purchase of the first Canadian Autonomous Underwater Vehicle (AUV) for freshwater.  This device will significantly improve water quality data measurement and will be demonstrated at Honey Harbour Landing on July 3rd between 1 and 3 p.m. 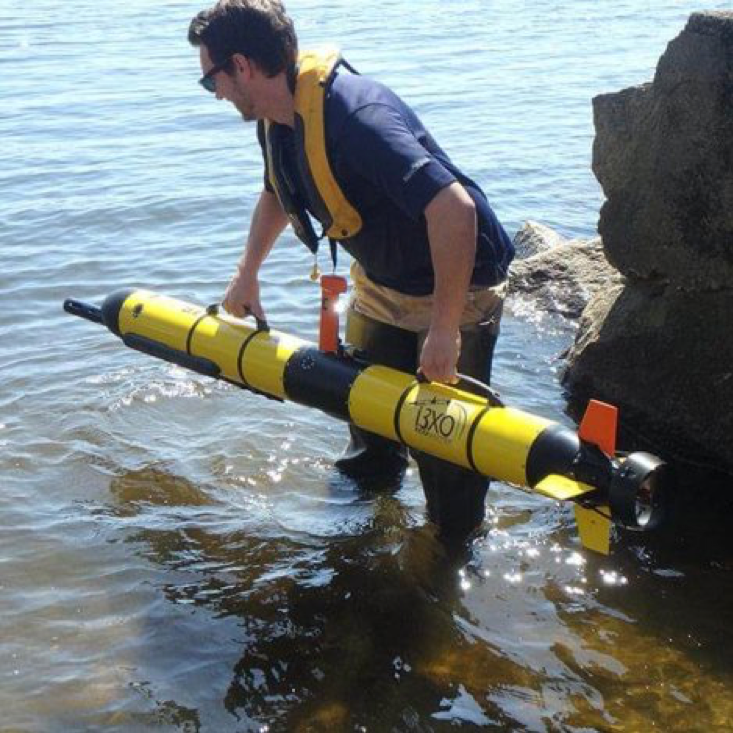 West Carling has also been chosen as a sampling site this summer.  David Sweetnam, Executive Director of GBF will launch the AUV in Snug Harbour with the intent to run it out to Red Rock and back. This location has been selected for ease of launch and the opportunity to collect data from a wide range of depths.  The launch date is yet to be determined but for anyone interested in attending, the date and time will be sent out to our members by email and posted on our website and Facebook page.

AUVs carry sensors to navigate and map features of the body of water. Typical sensors include compasses, depth sensors, sidescan and sonar. AUVs can also be outfitted with biological sensors to measure chlorophyll, turbidity, pH and dissolved oxygen.

AUV’s are already being used in the U.S. in a variety of ways by government agencies, the military, universities and corporations.  Oil and gas companies use AUVs to make detailed maps before they start building infrastructures and pipelines to minimize disruption to the environment.  AUVs have been used to find wreckages of missing airplanes such as Malaysia Airlines Flight 370. The U.S. Navy uses AUV’s for surveillance, oceanography and anti-submarine warfare among other applications.  Scientists use AUVs to study lakes, the ocean, and the ocean floor.  AUVs can be used to interact directly with the environment.  The Queensland University of Technology in Australia used an AUV to cull an invasive starfish which is harmful to the Great Barrier Reef, by finding and injecting the starfish with a lethal dose of bile salts.

The data collected by the AUV can help to assess the impacts of climate change, water levels, increasing development, industrial or municipal spills, sewage overflows, septic failures, bacterial contamination and the success of conservation measures.  The AUV will enable consistent data collection to monitor trends from year to year and assist stakeholders such as federal and local governments to make science-based decisions regarding issues that impact the health of the Bay.

Specifically, the data collected from the AUV will provide a clear window into the quality of the Bay’s water with the ability to create high-resolution maps of watersheds and Digital Elevation Models (DEM – a 3D representation of areas of the Bay). Uploading the data to a computer will support improved monitoring and the ability to address local hotspots where water quality has been compromised.  Adding a GoPro camera to the AUV will also make it possible to create underwater video records.

The i3XO AUV, which will be used in Georgian Bay, can be launched from a dock by one person, run night or day underwater for 8-10 hours, and be programmed to return to a rendezvous point for pick-up.  The battery powered machine weighs approximately 70 pounds and can travel at a speed of one to four knots per hour and is pressure rated to 100 meters.

If you are interested in seeing the AUV in action or learning more about it, please join us at the launch in Snug Harbour this summer.