Yes Virginia, There Really Was An Ice House 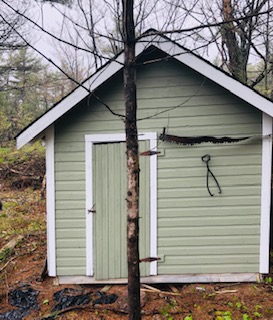 I would venture to say that there are very few people that have seen a real ice house-one that actually was used for several decades- still standing.  And yet as the photo above will attest, that odd beast that was so common in this area a century ago, proudly sits today in the bush behind the family cottage on Snug Island.  The irony of the situation is that it is the sole structure that survived the great fire of 2015 (see photo).  The deadly lightning strike on Sunday night of the Civic Holiday totally consumed the original cottage from 1923, burned or scorched beyond salvation a couple of dozen huge pine and oak trees in the surroundings, as well as the old wood shed quite a distance away.  But it spared the icehouse, the building that was useless, insect -infested, full of rot, an obvious fire hazard, and abandoned since the 1950’s.  How’s that for irony? 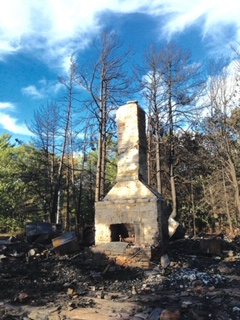 My sister Janet, always the sentimental one, decided to have it painted after the fire as a measure of respect and so that it would retain its historical prominence.  I can assure you that it did not look that pretty in my grandfather’s day.  My one regret is that I didn’t buy stock in Sherwin Williams when I heard of her decision.  Those old pine boards took a quick glance at the one gallon paint bucket swinging from contractor Smith’s (a pseudonym) hands and whispered “I know that guy’s a local, but is he nuts?  We’re going to suck down that paint so greedily, he won’t know what’s hit him”.  And so it came to pass.  Mr. Smith, a thirty-year painting veteran, vastly underestimated the thirst of that old icehouse and sheepishly had to scramble back to town for more paint.  We don’t talk about the budget for the job any more.

But look closely at the two objects hanging on the outside wall in the photo.  The topmost is the twisted remains of the 5 ft. two-man crosscut saw presently sans wood handles. The lower object is the ice tongs that were used for many years.  Both objects were on the antiques wall of the old cottage when it burned down and somehow survived thousand degree temperatures that melted the aluminum siding into small liquid pools and turned our kitchen appliances into blackened shells.  That they survived, albeit in twisted shape, attests to their amazing strength and resilience.  Not only do they not make them like that anymore, they don’t make ‘em, period.  Kids today have no idea what they are, or what they were used for.

Now speaking of ice tongs, there are a couple of things that you have to get right in order to carry off toting a block of ice properly.  Firstly, there are appearances.  Old John wrote the book on appearances.  The first order of business is not to shave for a week or so, and  to smell like something the cat wouldn’t go near, let alone drag in.  Bloodshot eyes behind bent wire spectacles are a nice touch.  You’ve also got to be missing a digit or two and walk with a pronounced limp.  A dirty red shirt fresh from the gas docks trash pile is de rigueur dress code as are torn britches held up by suspenders, using  bent nails for fastening clips.  And the carry technique?  Easy.  Only one hand is allowed.  Never, ever be seen using two hands.  That’s sissy.  Firmly grasp the single tong in one hand and deftly hoist the 75 lb. block, using gravity alone to tighten the tong’s grip on the ice, while simultaneously shifting your body off the bad leg onto the good one.  Then limp slowly up the path to the ice house with a soggy cigar butt firmly clenched between brown stained broken teeth.

Sure do miss Old John—but we do have a pretty green ice house still standing in mute testimony to his backbreaking labours. Wouldn’t he be pleased!